There are four stages of syphilis, each with its corresponding set of symptoms. However, the stages can overlap and the symptoms usually do not present themselves in the same order. To make matters worse, you can have syphilis for years without even knowing that you are infected due to the lack of any symptoms.

Even if you don’t exhibit any symptoms yourself, you can still transmit this STD to your sexual partner(s). If you have any reason to suspect you’ve been exposed to syphilis, you should perform a dedicated syphilis test as soon as possible and start treatment right away.

Let us now take a look at all the stages of the disease, which are known as primary, secondary, latent, and tertiary (late) syphilis. 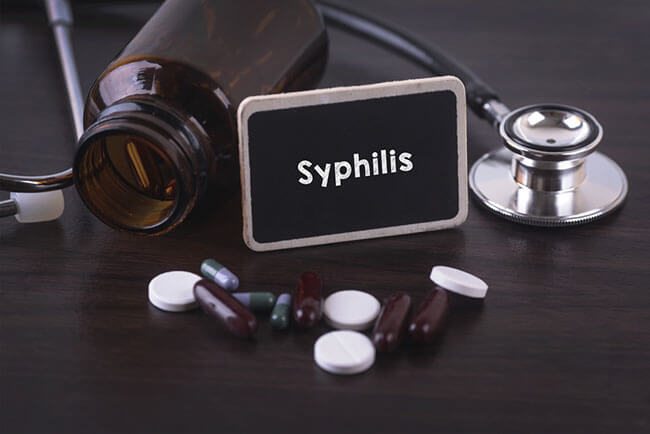 The early symptoms of syphilis usually present themselves between 10 days and 3 months after exposure. Initially, you might notice a slight swelling in the lymph nodes near your groin.

The first visible symptom of syphilis is usually a small, painless sore on the skin. It is quite common to develop several sores or chancres, as doctors call them. They normally manifest at the very spot where the bacteria entered the body. Chancres usually appear on the penis, so they are quite easy to spot.

The sore(s) usually heals on its own in around 3-6 weeks. This, however, doesn’t mean the infection has cleared your system. On the contrary, it’s about to initiate the second stage of syphilis.

Between 2 and 10 weeks after the first chancre appears, you may develop the following symptoms:

If you don’t get proper treatment at this stage, your symptoms will disappear and come back periodically. This can last for up to a year. Note that even if your symptoms disappear for good, you still have a live infection in your body. Without treatment, it’s just a matter of time before you enter the next stage. 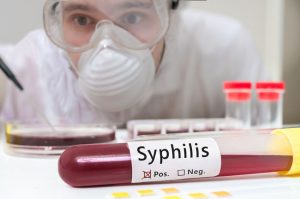 At this point, if you still haven’t received treatment for syphilis, the disease will usually progress to its latent (hidden) phase. Note that not all individuals with a syphilis infection go through this stage. But if you do, you will not exhibit any symptoms, probably for years. In some cases, the symptoms never return, but the infection is still present, progressing to its tertiary stage.

This is the last and most severe phase of syphilis. It can happen 10-30 years after the initial exposure and it can cause long-term organ damage and even death. The potential complications associated with tertiary syphilis include:

Syphilis is a highly contagious yet easily curable STD but only if caught in its early stages. Primary syphilis can be completely cured with a single shot of penicillin. If left untreated, syphilis is very dangerous and can hide in your system for decades, causing severe damage to your organs.

It is, therefore, essential that you get tested for syphilis and other STDs as soon as you engage in sexual intercourse with an unknown individual or someone you suspect might have an STD. With syphilis, early diagnosis and proper treatment are quite literally the difference between life and death.