Trichomoniasis, also known as trich, is one of the most common curable STDs in the US. It is caused by a protozoan parasite named Trichomonas vaginalis. According to CDC records, around 3.7 million Americans are infected with the parasite at any given time. The disease is more common in women (especially older women) but can also occur in men.

What is particularly dangerous about the infection is that only around 30% of the infected individuals exhibit any symptoms. It is, therefore, crucial to get tested for trichomoniasis and other STDs if you suspect recent exposure. This is the only way of diagnosing the infection accurately since its symptoms (even when they do occur) are commonly confused with other STDs.

As we already mentioned, about 70% of all infected individuals show no symptoms of trichomoniasis. When the symptoms do occur, however, they range anywhere from a mild irritation to serious inflammation. The symptoms usually develop 5-28 days after exposure. They can also come and go periodically.

The most common trichomoniasis symptoms in men include:

What Happens If Trichomoniasis Goes Untreated? 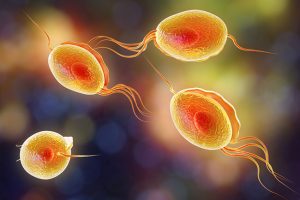 Without proper testing, most infected individuals will never even know they have trichomoniasis. If left untreated, the infection increases the risk of contracting HIV. If you are already HIV-positive, contracting trichomoniasis can also raise the risk of passing it to your sex partner(s).

How Is Trichomoniasis Diagnosed?

As we said, trichomoniasis shares its symptoms with other STIs, so it is difficult to diagnose this infection. Instead of physical exams, you should rely solely on dedicated trichomoniasis tests designed to positively identify the underlying parasite.

How Is Trichomoniasis Treated?

Trichomoniasis is very easily treated with antibiotics such as tinidazole (Tindamax) or metronidazole (Flagyl). You should avoid drinking alcohol for the first 72 hours after taking tinidazole and the first 24 hours after taking metronidazole. Combining these medications with alcohol can cause excruciating nausea followed by vomiting. You should also avoid any sexual contact for at least a week after you and your sexual partner(s) have been successfully treated. With treatment, the infection usually lasts about a week.

How To Prevent Trichomoniasis?

You can lower your chances of contracting this infection by using latex condoms every time you have sex. However, the parasite that causes the infection can also be found in areas not covered by a condom, which means condoms cannot completely protect you from trichomoniasis.